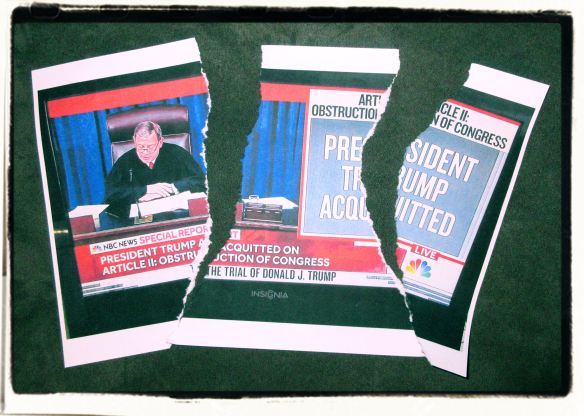 I’m tempted to write a response to today’s acquittal of Donald Trump from the articles of impeachment he’s been charged with. But I’m not going to write a response–even though there has been bi-partisan expression that Donald Trump’s efforts to blackmail a foreign country to help him win the 2020 election and his attempts to obstruct justice were wrong. I’m not going to respond even though there has been bi-partisan acknowledgement that Donald Trump’s behavior violated the public trust. I’m not going to respond to the Republican Senate’s decision not to convict Donald Trump for his abuse of power and obstruction of justice because the rules in the rabbit hole that has been carved into America by Donald Trump have rendered reasonable words meaningless.

Since reasonable words, rules, and the Constitution are now meaningless in America, at times like this, I wish I could carry a mini-Nancy Pelosi shredder in my pocket and have her rip up everything that I see as corrupt in this country.

Nancy Pelosi’s response to Donald Trump’s address to the nation last night was perfect. Trump and his administration have ruined the meaning of words that matter. Words like truth, integrity, dignity, decency … have been scrubbed from the American dictionary by Donald Trump and his supporters. There is nothing that Nancy Pelosi could have effectively said in response to the circus President Trump presented to the country last night, which was packed with lies and political stunts. In Donald Trump’s rabbit hole version of America, the perfect response to someone who is too stupid to listen to words concerning reason and decency is to rip up his bogus State of the Union speech.

If I had my own mini-Nancy Pelosi shredder, I would also have her rip up Donald Trump’s impeachment verdict.

© 2020 by Julie Ryan. All rights reserved
No part of this document may be reproduced or transmitted in any form or by any means, electronic, mechanical, photocopying, recording, or otherwise, without prior written permission of Julie Ryan