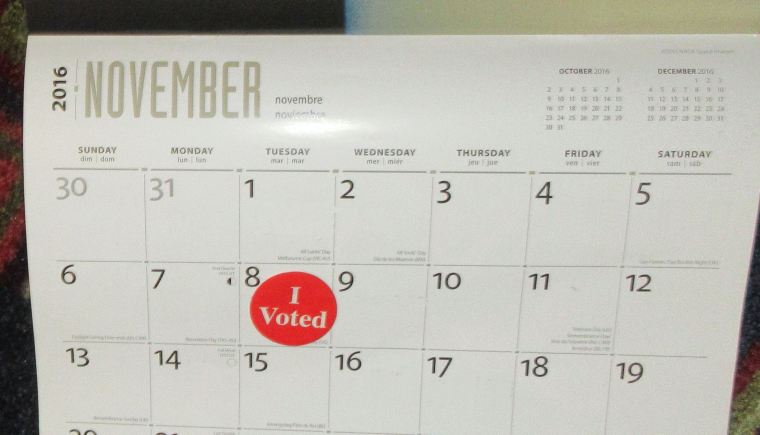 We Americans have survived a year of living in a politically incorrect country led by someone who had no political experience when he was elected—and still doesn’t seem to. Although I still have a PTSD-like reaction literally every time I see and hear President Donald Trump, I’m happy to note that I’m still standing. I didn’t sink into that black hole that opened up under America on Election Night 2016—an opening to a political world never before experienced in this country.

Labeling Donald Trump’s victory a black hole a year ago isn’t sour grapes on my part because my candidate lost; it was because I genuinely care about my country and I feared how being led by someone with questionable character would affect all of us. A year into this bizarre American political and social experiment, it’s evident that my initial concerns were justified, as is my traumatic stress-caliber response to my president. I’ve always been a peacemaker and have always wished peace for the people around me. I had grave concerns about what a divisive, chaos-loving man like Donald Trump could do to my country. Clearly, my country has been unraveling since Donald Trump won the election.

Even though I am a peacemaker, I have strong viewpoints about what I believe is “right.” The pursuit of peace doesn’t mean I have to abandon my opinions; it simply means that I recognize the value in respectfully listening to other people’s viewpoints so that I can understand what motivates them. I believe that if we find someone’s beliefs to be destructive to the well-being of others, the best way to introduce new ideas to them is to first listen to the explanation for their beliefs and actions. Telling someone to change their thinking, or bullying them to do it by applying the pressure of political correctness does not inspire true change; it usually causes people to dig their heels in and go underground with their actions if the political environment doesn’t support their beliefs. This is a concept that both the Republican and Democratic party have seemingly lost sight of. Being a peacemaker who tries to understand other viewpoints doesn’t require conforming to someone else’s way of being. But, it does require me to treat others as I want to be treated—a concept that I believe is at the core of my country’s democracy.

Since last year’s election results, I’ve put considerable effort into tying the broken threads of my society together by initiating meetings and conversations across the partisan divide.  Attempting to inspire others to see the value in hearing what the opposition is trying to say has been a ridiculously uphill battle against tribalism. I have discovered that people find it much more enjoyable to hold hands with others who hate the opposition than it is for them to reach across the divide to try to understand another perspective. Tribalism fueled by hate can’t possibly result in moving our country forward; at best, it will result in a hateful stalemate that goes on forever.

We definitely need to examine why there are a significant number of people celebrating the ugly political climate that rolled in from the far right with Donald Trump’s “incorrectness.” It’s a movement that gains its energy by threatening the well-being of other people. But we also need to examine the momentum that is compelling so many on the far left to descend to the level of equally ugly counter-actions instead of taking the more productive high road. I feel I am surrounded by horrifying behavior on the right and the left, and it is a challenging position for a peacemaker to be in.

I have been living in a state of disgust for a year. My disgust with Donald Trump’s narcissistic and misogynistic behavior is understandable, and even expected, from someone, like me, who is obsessed with matters of morality. My disgust for so many of my fellow Americans is an unexpected result of Donald Trump being elected president. I realize that Donald Trump didn’t create citizens who are racist, greedy and violent; they always existed. His politically incorrect behavior simply opened doors—on the right and the left—to a political climate that publicly supports such negative behavior. He didn’t cause the dysfunction in my country; he is a result of it. While I am starting to understand the motivation behind destructive behavior, I am still disgusted by the fact that there are so many people in this country who are unable, or unwilling, to put themselves in someone else’s shoes. The fact that Donald Trump was able to get elected President of the United States of America is an indication that there was something seriously wrong in my country before he came along.

For a year, Donald Trump’s beacon of immorality has been shining a light on the ugliest corners of America. As someone who is conflict-averse, my gut reaction is to look away. It would be nice to crawl away, into that black hole that is sitting under my country. My attempts at promoting peace this past year appear to have been pointless and I’d like to curl up into a political fetal position. And it would be nice to justify giving up by claiming that I unsuccessfully tried my best to compel people to stop yelling at their opponents and start listening to one another so that we can move forward as a nation. But, I simply can’t give up on what American politics can potentially be because of my love for this country. Intellectually, I know that I want people with integrity to stand strong and not give up the fight for peace. As a peacemaker, I have to do what I want others to do. I have to continue standing above the political black hole that threatens to swallow the United States and the democracy it was built on. So, I will continue reaching across the divide to those who hold opinions in opposition to mine and I will listen to them . . . if for no other reason, because that’s how I would like them to treat me.