I have a confession to make: I want to kill a cardinal. But I’m not going to do it because I found out when I Googled how to permanently get rid of a cardinal that it’s illegal to do so because of the  Migratory Bird Treaty Act of 1918. Someone actually cared enough about songbirds back in early 20th century America to bother making a law that protects them. I think that the person who first thought to create the law has never had a cardinal attacking their windows for eight days straight.

I am a conscientious person who tries to be kind to all living creatures. I’m also very sensitive to audible and visual stimulation. The sound and sight of a red bird repeatedly crashing into my windows (especially at 5:30 in the morning) has put me on a psychological edge. Honestly, at this point, the only reason I’m not taking my husband’s .22 rifle to the bird to put it out of my misery is because I’m a light sleeper and if I get caught shooting the cardinal I fear that my sleep will be even more interrupted by the sounds of fellow jailbirds. Before you pass judgment on me for wanting to kill a “beautiful” song bird, I challenge you to live with it rapping at the windows of your house roughly every one to two minutes during its waking hours for over a week.

The character, Atticus Finch, in To Kill a Mockingbird said, “…it’s a sin to kill a mockingbird.” He said it was alright to kill a blue jay, though. I feel like northern cardinals are a lot like blue jays, except they’re red, and that at least Atticus would forgive me if I eliminated one that has claimed my home. I know that my husband would forgive me for killing this cardinal, too, because he has also had to suffer through its attacks on our windows.

In my defense, my husband and I had spent several hours this past week installing various cardinal deterrents before I entered into my current murderous state. We weren’t educated in bird behavior in the beginning, so we assumed that the cardinal was trying to fly through the windows on the north side of our house – all twelve of them – and that he didn’t realize that there was a world beyond the front of our house. The logical solution to that problem seemed to be closing all of the north window blinds. That worked – for a while. He started crashing into the widows again, so I chased the bird to the side of the house, thinking that I was kindly introducing him to the rest of the world. He spent a lot of time perched in the trees on the west side of the house and I celebrated the end of the pecking at my windows. My victory celebration was premature because the bird started diving into the north windows again. My husband read that placing a mirror near the house for the bird to attack instead of the windows would help. So he placed a large vanity mirror on the north side of our house. It helped – briefly. Even though I didn’t think I would decorate with them again until I had grandchildren, I pulled out the box of my children’s Valentine’s Day, Easter, and Christmas window clings.

I stuck to each of the north windows all of the clings that had faces on them, with the hope of scaring the bird away. That worked – temporarily – until he started making a point of attacking the faces. My mom suggested hanging reflective foil strips from the windows. I did that and it worked as a scare tactic – I jumped every time I walked around the north side of the house because the sound kept startling me. The bird wasn’t bothered by the strips for long, though, and returned to attacking the windows. The pompom-like clusters of foil strips suspended from my windows ended up looking like I was a cheerleader for the cardinal. 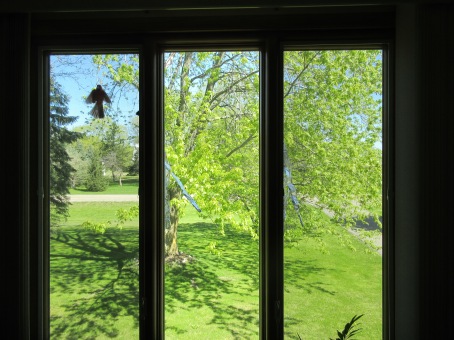 One morning I saw a dead bird sitting next to the bush the cardinal had moved into. I swear I didn’t do it.  I was so disturbed by the image that I finally did research to try to get into the head of the bird brain that was attacking us – and perhaps the dead bird. I found that northern cardinals live on average for three years in the wild. So if I couldn’t make him go away, I might just have to accept the presence of this pest for the next few years. Northern cardinals can become obsessed with their own reflection. These birds don’t need much sleep and will tweet at odd hours. I realized that I was dealing with a feathered metaphor for Donald Trump. That realization made me feel motivated to get rid of the cardinal-in-chief that had taken over my yard as quickly as possible, before he settled in for a four-year term in front of my house.

I discovered that northern cardinals are very territorial and will attack their reflection because they think they are seeing another bird competing for their territory – which is why the mirror in front of our house should have helped. While I opened the windows slightly to decrease the chance of reflection and turned up a radio by the windows to frighten the bird, I saw that my husband was hanging a mousetrap between the bush the bird had claimed and a set of windows. We demonstrated our solidarity as my husband and I resisted the presence of the bird together. The cardinal stopped attacking the windows – for a bit. It came back, so we left. We went for a walk on a trail in the woods, where birds live. While hiking, I wondered if the cardinal disrupting my experience at home was some kind of karmic result of my constant presence in natural bird habitats. I’ve probably caused many sensitive birds to Google how to get rid of that pesky Julie who thinks she has a right to invade bird territory.

After our walk we picked up some tape to apply to the windows to further cut down on the reflection. It’s a good thing we found something else to try because despite the music drifting through the windows, the bird was back to hitting the windows every minute and I had apparently only succeeded in bringing the bird up to date on the current top 18 songs on Alt Nation. I switched the station to NASCAR radio, hoping that the banter about driving in circles would chase the bird away. It drove me crazy, but didn’t affect the bird. So, I put strips of tape on all twelve of the windows. I placed the strips an inch apart so that I could still get some sunlight in the house for my plants, while disrupting the reflection. This helped decrease the number of attacks on the windows, but the attacks still continued, and eventually returned to the once every couple minutes frequency.

A couple days ago, after being awoken early by the cardinal, I looked out one of my second story windows. I peered down to the bird poop covered territory in front of our house that now belonged to him and saw the cardinal sitting on the ground. I felt compelled to go get my large dictionary, open the window, and drop it on him. As I turned to get it, it occurred to me that death by dictionary would still count as killing – a violation of the Migratory Bird Treaty Act of 1918. Instead of getting my dictionary, I rummaged through my closet and found sheets of packaging bubble wrap. I was ready to block

my northern view and let my houseplants die, just so I could have my sanity back. So, I started covering the outside of three of the windows. It was very difficult to reach the exterior window panes, so I only did three of them. If the bubble wrap successfully deterred the bird from attacking the three windows, I would cover the remaining nine. The bubble wrap worked – for a day. I awoke early this morning to the sound of the bird attacking upstairs windows. When I walked toward the north windows I saw that the cardinal was attacking the border around the bubble wrap…

I surrender. The cardinal-in-chief wins. I’m leaving my home and moving to Canada. 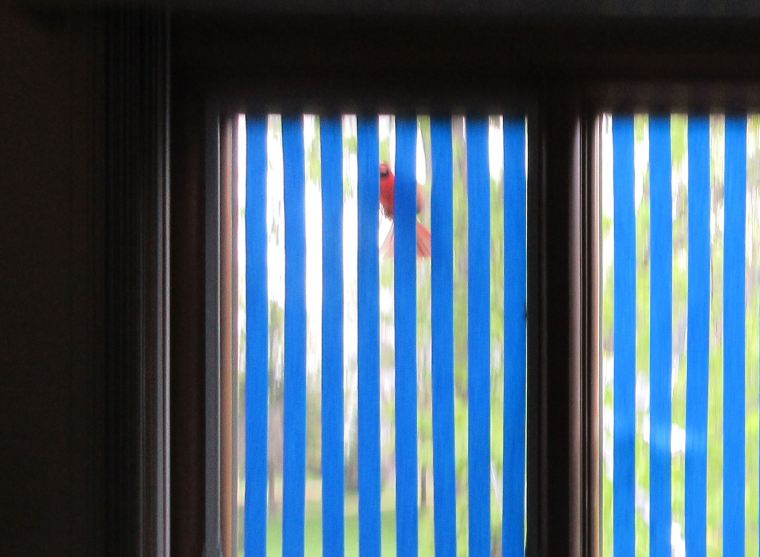 6 thoughts on “To Kill a Cardinal”