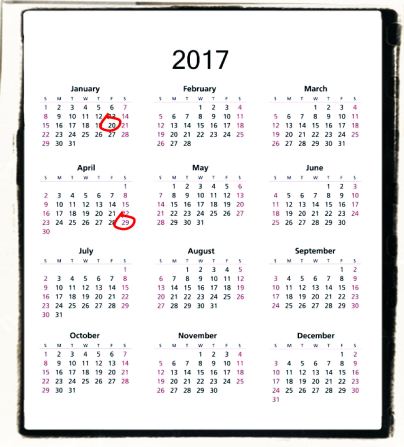 Instead of dwelling on what President Trump has not accomplished during his first 100 days in office, I will examine the plank in my own eye and address what I’ve done with my first 100 days of Mr. Trump’s presidency. When I look at it from that perspective, it’s surprising how fast a hundred days can zip by. In my defense, I was a bit distracted so I didn’t accomplish what I typically would in the first quarter of the year.

Much of my time was devoted to making orders. They weren’t executive in nature; rather, mostly for books on subjects like how to talk with people who think differently than me without insulting them; how to constructively contribute to the political process in America instead of running away to my own island; and which natural foods to eat to combat ulcers and overwhelming anxiety.

Four hours of my Saturday was recently given to sitting in an auditorium getting to know Muslims so I could gain an understanding of the Islamophobia that seems to be gripping so many Americans. I left the event not understanding Islamophobia, but with a deep respect for the Muslim community. A few hours of a Friday night was also used to meet some of my Latino neighbors. The fear in the room about having families ripped apart was palpable and I have spent considerable time since then exploring what I can possibly do to help combat fear. This has involved significant time researching immigration and naturalization.

Since the inauguration, I’ve also devoted significant time to re-familiarizing myself with the Constitution, Articles, and Amendments. My high school Civics teacher had glossed over citizens’ rights and never covered impeachment rules. So I’ve had to spend a chunk of time learning about that so I can react intelligently to the daily news feed.

I have been spending considerable time with my kids’ old globe. I’ve been measuring just how close, Russia, Iran, Syria, and North Korea are to my home and other homes of people I care about in the U.S. For some reason I never really grasped the proximity of other countries in 8th grade Geography class – maybe because we were taught from a two-dimensional page instead of in the context of global relations. The distance between North Korea and my son’s home in Seattle is a little more than the distance of the spread between the tip of my thumb to the tip of my pinkie. That finding resulted in reading about North Korea’s missile arsenal statistics – which consumed a couple hours of my time. It was time well spent because I discovered that North Korea doesn’t currently have a nuclear missile that can travel the distance of my hand across my globe … but they probably will be able to reach the U.S. mainland before the end of Trump’s term.

So, an evening was spent a couple weeks ago working on another order as I browsed Jim Bakker’s doomsday website and found myself calculating just how many emergency Tasty Pantry Deluxe Buckets it would take to feed me in an underground bunker for the remainder of my natural lifespan. I estimated that if I want to live another forty years, at three meals a day it would take 43,800 servings of food to keep me alive. Because I’m borderline hypoglycemic I added another 29,200 servings (an additional 2 per day for the rest of my life) so that I can be in a good mood while I sit underground waiting for the world to end. Since each Tasty Bucket comes with 283 servings plus an additional bonus 91 servings, I figured I would need to order 195.1871658 Buckets at $100 each. I was about to place my order, but abandoned it when I saw that the contents of the Buckets have only a 25-year shelf life, and that it could take up to six weeks to receive them – by then it might be too late. More time was then lost doing Google searches for images of Jim and Tammy Faye from back in the good old days – when corrupt Evangelical leaders were the only real threat to my well-being. Then my time was spent being philosophical as Jim and Tammy caused me to think about my own faith and what being a Christian means to me. At its core, my faith means to me what it means to Muslims, Jews, and to people of other faiths: treat others as I want to be treated.

Much of my schedule the past few months has been devoted to putting the Golden Rule into action more than I have ever done before. I’ve been motivated to organize people locally to help promote peace and find ways to help our neighbors thrive in what has recently become a relatively mean-spirited culture. The instability of healthcare, the erratic stock markets, international tension with the U.S. and the threat of going to war, the fear among my undocumented immigrant neighbors, the opposition to people who practice Islam, and the general state of divisiveness that is being promoted by many of my government leaders has caused me to take the time to share whatever I have to offer to the hungry, the homeless, the veterans, the afraid, the persecuted. . . Sometimes I feel all I have to offer my fellow Americans these days is a kind word or a smile because I feel like I’m so short on the time needed to accomplish everything I want to do.

I don’t feel I have accomplished anything significant the past few months because I have been so busy doing things I wouldn’t normally do; but I am more informed on many subjects and I’m a demonstrably kinder person than I was on January 20th – and I credit my president with that. I guess Mr. Trump did accomplish something significant in his first 100 days.