I’m not going anywhere, but if I was, I wish the world would be up in arms about it – to the point of calling Julie’s desire to leave: Jexit.

Once my intended action was cleverly labeled, I imagine that intense conversation around the world would follow concerning whether or not I should exit. Well, at least here in the United States conversation would occur, because we know how important it is to discuss things with cute nicknames. In our predominantly ADHD society, nicknames – like squirrels skittering by – are our cue to suddenly take note of a current event. That way, we can be equipped to discuss it at the water cooler and appear as if we’re well informed and always focused on what matters. Because of the cute nickname mash-ups, here in the U.S. we believe that what matters right now is Brexit (Britain’s vote to exit the European Union) and Regrexit (Britain’s immediate regret over voting to leave the European Union – D’OH!) Is it possible that British society is as ADHD and as easily manipulated by words as Americans are?

Coining catchy words or phrases is a skill that most of us trained in the advertising world are adept at. We understand the power of words that infiltrate consumers’ brains. Exposure to the right word choice can result in making a loyal consumer of a product for life, simply because the catchy words are permanently stuck on the brain. The words don’t even have to make sense, but heard frequently enough, people will convince themselves that the words must be meaningful. I’m pretty sure I only buy Oscar Mayer wieners (and don’t even consider other brands) because I’ve been mindlessly humming since 1968 that I wished I was one. The song is in my head 24/7 and variations of it move to the forefront of my mind at the most unexpected moments. Does that make any sense? No. I’m not that into hot dogs, but I constantly proclaim that I wish I was one, then I turn around and buy a pack of them so I can eat them. This is pure craziness that can only be explained by the power of word exposure.

Political speech writers also understand the power of words. There doesn’t even have to be any semblance of truth in the words that politicians utter and citizens will believe what is being said if they hear it often enough. Even if a story is truthfully presented by the press, unfortunately, a lot of Americans are only capable of consuming sound bytes and cannot digest the context of a headline. It seems that many Americans remember only their version of what they think a headline meant. Many people simply don’t want to be bothered with the details of the truth – maybe because it requires too much focus to consider both sides of an issue?

As someone who has extensively studied  the power of words, I fear for my country. I have to admit that it’s been kind of fun for me to watch how people react to every stupid thing that’s been shared through the American media this political season. But, people are so easily brainwashed that it actually does scare me. Something catchy is said by a politician, it is played repeatedly by the media, and it gets stuck in peoples’ heads. There have been a lot of catchy things thrown out for consumption this political season. As a result, many citizens in the U.S. are running around behaving like a bunch of Oscar Mayer wieners, without really knowing why they are believing what they’re believing; supporting who they’re supporting. They’re doing what they’re doing because they’re humming a politician’s figurative song that was skillfully implanted in their brain with the help of speech writers (or loose cannons in some cases) and frequent exposure through the media.

Even though I feel like I would make an excellent cult leader (or political speech writer) because of the word power I possess, I choose to use my skills for good instead of for evil. But maybe I should use my gift for word usage to start helping myself and promoting myself more. I feel like my writing could use a little more attention – okay, a lot more. Maybe I should start coining cute terms for my writing techniques to get all of the squirrel followers around me to take note. Then I could create a catchy literary trend and people would follow and want to be like me.

People who like to share with others their deep thoughts on things that matter (like Sasquatch lawn ornaments, sore thumbs, and Budweiser beer labels) could be called jhinkers. Someone who wants to put their (neurotic) thoughts into words like I do could be called a jriter. Wordy opinion pieces that rise to the level of my thoughtful (OCD) caliber could be known as jessays. People who believe that lots of other people would be interested in buying 287 pages of their fiction, but don’t personally know many people who are even capable of reading their 1 ½ page blog posts could be called jovelists. Okay, now that I’ve exhausted my trivial thoughts related to this topic, I’m jinished . . . 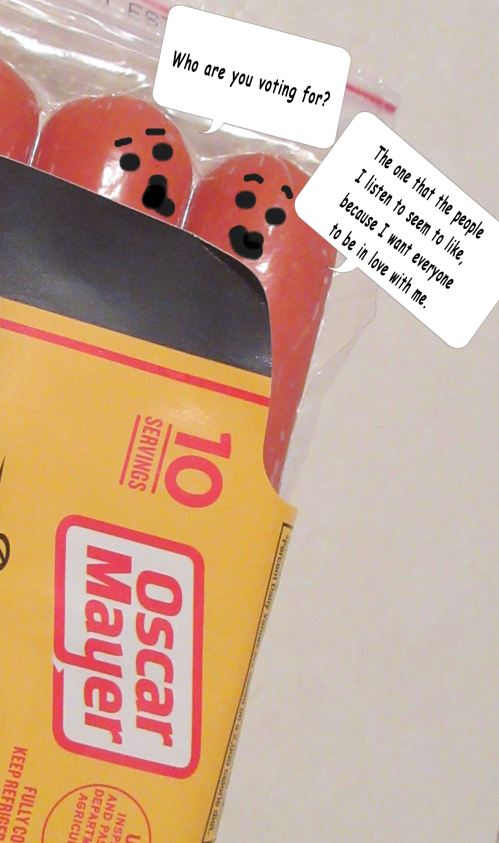 © 2016 by Julie Ryan. All rights reserved
No part of this document may be reproduced or transmitted in any form or by any means, electronic, mechanical, photocopying, recording, or otherwise, without prior written permission of Julie Ryan.